It’s been a year since Times of India launched a Kannada newspaper – no, I am not talking about Vijay Karnataka. The Kannada version of TOI is (was?) essentially a translated version of the English newspaper. At least when I glanced through it during its launch phase.

They have now released a print campaign, attempting to appeal to the youth – joining the other 7000 brands which do so. The ad asks – while one has to go with dad on holidays, drive dad’s car etc., why should one read his newspaper too. The effort seems to reposition the other Kannada newspapers (not Vijay Karnataka, I presume) as fuddy-duddy and meant for ‘your father’. There is some truth in that claim. Prajavani and Udayavani (which is strong in the South Karnataka region) are a bit staid, almost dowdy. They are like The Hindu (no disrespect meant to The Hindu) in some ways. 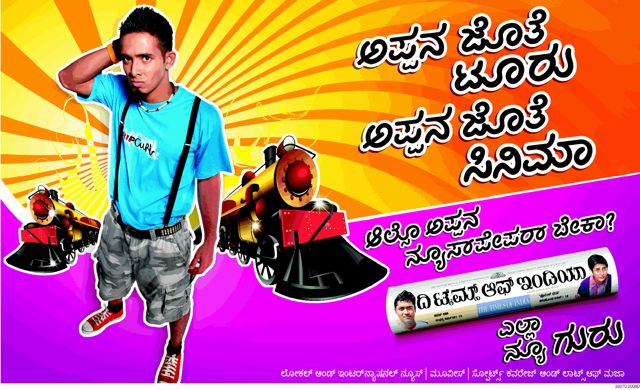 I am not sure if TOI Kannada is circulated beyond Bangalore. If it does so, this makes some sense. I would imagine that Kannada-speaking and Kannada-newspaper reading audience, specially the youth are out there. They may find the TOI Kannada spicier than their current brand. The ad’s tag line says, ‘Yella, new guru’ – ‘it’s all new, brother’ – and could be referring to original content.

While TOI does not have the baggage of heritage in Kannada, several brands in other categories have had to face the issue of heritage = old. One example that comes to mind is Oldsmobile. In 2004, they released ads with tag lines like “This is Not Your Father’s Oldsmobile” and “A New Generation of Olds.”

Will TOI’s campaign have an effect on other newspapers? Will the competition simply ignore it? That remains to be seen. What happens to Vijay Karnataka? Why can’t that be used as a weapon to attack the established players? I guess at least one thing is clear: there is competition for the veterans. And competition is good, isn’t it?