When I first saw the print ad with a headline ‘All I need is all I got’, I was left scratching my head. Now that I am getting to see all the elements of the new Levi Go Forth campaign, it is all beginning to make sense.

Over the years, Levis has produced several great advertising campaigns – some considered to be landmark advertising. The laundromat, chemist’s daughter, the Amish girl and several others were considered classics that made the brand sexy and desirable. But Levi runs the risk common to most heritage brads: being irrelevant or uncool to a whole new generation. Not that it is, but the new Wieden + Kennedy campaign attempts to appeal to those in their early 20s in the US. This generation, dubbed the Millennials or Generation O is very optimistic and patriotic as was evident with the appeal of President Obama’s ‘Hope’ campaign.

The Go Forth campaign includes a new declaration, a TV spot, whose voice over is said to the original recording of Walt Whitman reading his poem ‘America’.

The print ads, shot by Ryan McGinley (who also shot the Wrangler ‘We are animals’ campaign) have a refreshingly different look about them. The headlines seem to battle cries or call to arms: Will work for better times, Tough as your spirit, Do the best you can and don’t look back are some of the headlines. 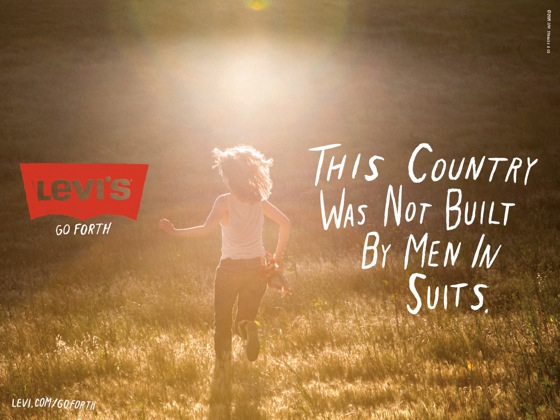 The website calls for people to upload their pictures of everyday America. Will this campaign resonate with the current generation of American youth? I think it has a good chance. American’s have always responded to calls on kindling the national spirit (not just in Hollywood) and brands have taken advantage of that. I think the Levi campaign taps into the current ‘tough but optimistic’ mood of Young America.

The youth are also the toast of several marketers & agencies in India. Is there a difference in approach to how we attempt to address them? There is an acknowledgement that the ‘new generation’ is confident and optimistic here too. But a lot of the effort seems to be focused on ‘speaking the language of youth’ at a superficial level. Youngistaan, comes to mind?

Do you think a national pride and call for working to a better tomorrow will work in India? Any thoughts on the new Levi campaign? Go forth and tell.