The Micromax Turbo teaser was not a teaser in the classical sense – everyone new what was coming. The expectation was more about what the reveal ad would be like and the features of the phone.

When it comes to teaser ads I have always felt that in most cases the reveal does not live up to the hype or expectations created by the teaser. The teaser usually evokes a ’so much hype for just this?’ kind of reaction or the idea and execution turn out to be along expected lines for the category. The Micromax Turbo reveal ad with Hugh Jackman is of the latter kind – the ad is along expected lines for both the category and celebrity advertising. This is not to say that the move to sign up & showcase Hugh Jackman is a bad one – it is a step in the right direction for the brand. But the reveal is constrained by a few things.

Firstly, the need to create an ad that sits in well with Hugh Jackman’s limited time. I mean, the agency team cannot think of a script which begins with, ‘The film opens on Hugh Jackman jumping off a cliff in South Africa…’ Hugh Jackman’s team would have given a few hours of time in a studio in between some other engagement and Micromax team would have to live with it. That’s a constraint most ads featuring top-notch celebrity ads face – they have to be written around the celebrity’s time and availability.

Secondly, the ad is a generic one for most smartphones and ‘phablets’. Advertising based on the features would not have been possible given the above constraint. And the features are explained in the print ad in any case. 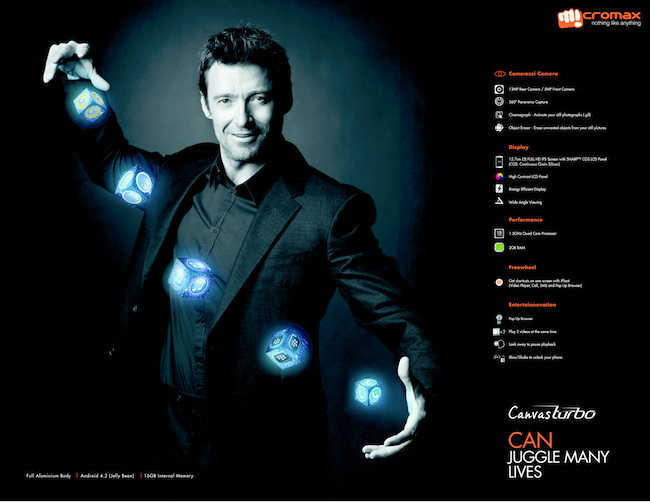 The larger challenge for the brand (common to other Android brands) is the need to be distinctive in a sea of sameness. That is an inherent challenge faced by all Android phones – if the OS is common to a multitude of brands how will they stand out? And what advantage does a consumer get while choosing one brand over the other? It then becomes a battle of tangibles and intangibles. The tangible part is the hardware specifications and the visual layer added on to stock Android. The intangible part is the brand affinity.

Today, the brand equity of Samsung is perhaps the strongest among Android phones (some may argue that it is among ‘all’ phone brands) and cuts across many segments – from the premium to the low priced. The same cannot be said about LG, Sony, iBall, Karbonn, Intex, Lenovo, Panasonic and countless other Android-based phone brands. All of them face the challenge of being  distinctive and creating brand preference. Celebrity endorsement is a common route (Katrina Kaif for Sony, Farhan Akhtar for Intex etc.) and the easiest to execute. It will be tough for Android brands to be distinctive in the software area by adding skins and feature sets. With Google positioning Nexus as the pure, stock-Android phone it gets even tougher for the other players. In this context, the Hugh Jackman association gives Micromox the opportunity to pull away from the crowd and create a strong brand affinity. However, mere presence of Hugh Jackman in the Micromax ads will not suffice. The brand has to deliver on the product, customer service and brand story telling.