I remember being swayed by the Maggi mania as a kid and pestering my mom for it. As an orthodox household where outside food was rare, Maggi was one exception. God knows if the preparation wasn’t right, but the my first taste of Maggi was awful – my mom had a triumphant ‘I told you so, don’t be fooled by ads’ look. Of course, over the years it has served as a meal, a meal replacement and more during bachelorhood & beyond. I am sure there are millions of other Indians who have Maggi stories of their own. And the great part about the brand is that kids today perhaps feel the same way about this brand as did kids 25 years ago. No wonder this consumer connect is at the heart of  the 25 years of Maggi campaign. 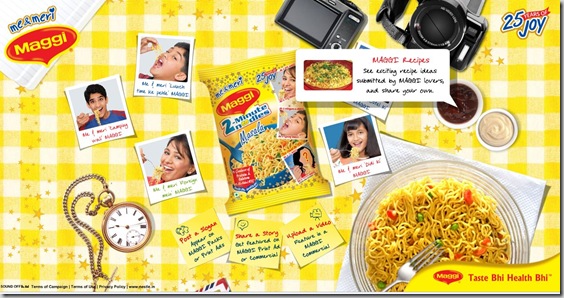 I guess Maggi is a great example of market creation. When it was introduced it was an alien concept & taste. But they did not set out to change India’s eating habits or practices. Instead they attempted to make it a part of the Indian consumer by addressing a need. It was first positioned as a convenient snack for working women. Kids came into the picture soon after along with the famous advertising and the 2-minute noodles property. They have also been quick to changing course – when the formulation was changed in the late ‘90s in the wake of competition from Top Ramen, sales dropped. They got back the original Maggi soon after. They also introduced the Atta Maggi in 2005 addressing the health concerns of mums. Today Maggi is a generic brand name for noodles, thanks to the brand building efforts and the persistence of vision of the marketing team.

The 25th anniversary ad is competent and gets the message across (see them on the microsite under Time Capsule). I personally feel that the earlier set of Maggi ads were more memorable – the jingle, the baseline are part of Indian advertising lore. Maggi also gave us a great campaign in ‘It’s Different’ for their ketchups. Interestingly, the social media space is aflutter with mentions of the Maggi campaign – which is not acknowledged in the microsite at all. I would have thought that the net savvy audience would be the most hard core Maggi consumers (presumably during their hostel, MBA days) and it would have been nice to feature all their reactions on the site.

By launching variants like Cuppa Mania and getting aggressive on the soup cateogory, Maggi is strengthening the brand franchise. The 25 years campaign is a great opportunity to further the brand’s connect with its consumers. And by including them in the campaign, instead of being a chest thumping exercise, Maggi has played it smart. So here’s to Maggi – a great lesson in brand building.