One yardstick of knowing whether an Indian ad campaign has touched a chord – at least among the advertising community is the number of comments in online trade portals: when you have more than 10 comments about an article, you know its generating buzz…er, quite like my blog.

I got to know about the launch of Audi A8L and the 3D campaign from trade publications. I was surprised to see some negative comments (seemed like someone taking out a grudge) – in my view, the idea and the execution seemed to make sense for a brand like Audi. Yes, 3D, augmented reality & related technology been used before in advertising, but the fit with Audi seems more natural.

Raj Kurup, founder of Creativeland Asia, the agency behind the campaign (they have made a habit of creating work that gets talked about – LMN, Hippo, Frooti to name a few) sent me the press release. According to the PR blurb:

We placed safety at the base of the pyramid, above that came the need to achieve and flaunt status. On top of that, and just below the tip, came aesthetics and form. At the tip, the pinnacle of human evolution, the need for self actualization, was represented by Brand Audi. This feeling of self actualization has been beautifully captured in campaign line for the Audi A8 L in The Advanced State of Mind. 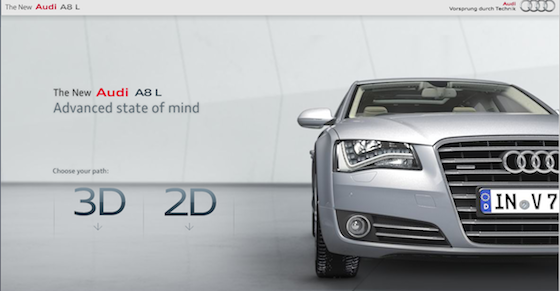 Marketing spiel aside, what works for me is the use of new media. While coverage about the campaign (good PR effort too!) has focused on the 3D film, at the centre of the campaign is the microsite. A direct mailer inviting prospects to view the film on the web (DM consists of a custom made high quality Audi anaglyphic 3D glasses and a full 3D car brochure) and an iPad app are part of the campaign. Also working for the campaign is the world-class execution – going to The Mill of London helps.  Apart from promoting the car, the effort to promote the campaign among bloggers and car enthusiasts is commendable too. Hats off to the team.