I have been dying to write about this for so long: I have felt a lack of importance placed on the interface in Windows applications and a majority of Windows users. This article from Smoking Apples served as a trigger. One of the common reactions from PC users after seeing a Mac is to drool over the graphics or the user interface. But it’s not just about making people drool – there is a method in the madness in every part of the design – be it icons or other graphics.

Louie Mantia, one of the best graphic designers in the mac community compares the icons of different applications in Mac & Windows and says: ‘I have learned a lot about the importance of icon recognition and design. It is one of the most important things for an application, it is the very first experience for the user: figuring out what the app is, before they open it’. So true. It is the equivalent of packaging design in FMCG or shop front in a retail environment.

Let’s take a look at a few comparisons. Front Row, as the name suggests allows you to enjoy a ringside view of your photos, movies and music. In contrast, the Windows equivalent is a glorious rendition of the Windows logo.

The calendar icons brings up the current date automatically in the Dock and highlights the date conjuring up visions of what we are familiar with – the desktop calendar.

What is apparent is the amount of detail one can see in an application icon in a Mac. Be it Apple’s own applications or 3rd-party applications, both the user interface and icon are a lot more pleasing to the eye than the Windows counterparts. The icons have vastly improved in Vista but in the earlier versions, almost all applications were ghastly.

And then you have Winamp. It must be one of the most popular audio players in the world, but its GUI must rank as one of the worst. It’s skins are ghastly, to say the least. Yet, its users seem to have no problems with it. On a related note, the amount of time & effort that goes into skinning Windows and its applications is conspicuously absent in a Mac. Wonder why? Many Windows users skin the OS to make it look like a Mac. Even applications designed by the same company for the two platforms suffer the same fate. Here is a screenshot of Feed Demon, on the PC platform. 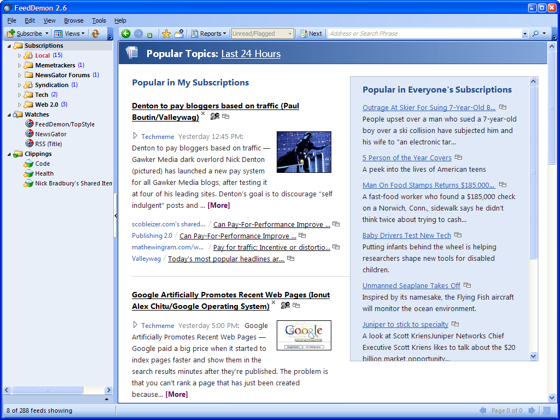 And here’s a screen shot of the same product, from the same company – Netnewswire for Mac: 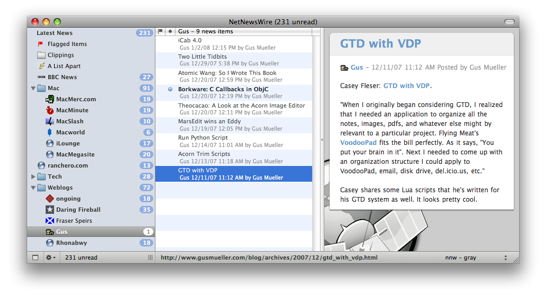 I have also noticed most PC users I have interacted with pay no attention to aesthetics even on mundane stuff like PowerPoint slides. It seems OK if the slides are not formatted, text is typed in an unwieldy manner or there is poor alignment of text and images. In contrast, Keynote automatically guides the user in terms of alignment of text & graphics.

I wish I could reach out to the 90% of the world’s PC users and emphatically say that the user interface is vastly superior on a Mac and all Apple products. And it goes beyond mere aesthetics. It’s about functionality with finesse.