The ad blogs’ favourite whipping boy Enfatico used to get panned for every reason under the sun, especially for not releasing any major creative work for Dell since their inception (Enfatico’s inception, that is). Now that they have finally released a campaign for India, they continue to get panned. Read more about it in AdAge, Business Standard and Adrants.

The ad is a departure from Dell’s usual Direct Response ads – they feature humans (wow!) and not just a machine, some specs and a toll free number. But the new work left me just as cold. Not just because I prefer Macs. It’s nice and clean and all that but will it help move up the ladder from No.5? 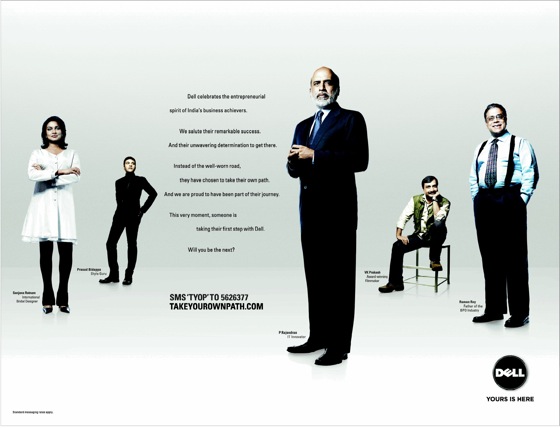 The strategy to attract small-businesses through ‘real life heroes’ (a dig at Lenovo and Acer who have Bollywood stars as endorsers) is not a new one. Some time back HP ran campaign featuring the likes of Dilip Chhabria and Karan Johar, highligting how HP helped them succeed in business. HP’s international campaign (The PC is personal again) featured fashion designers, sports persons and such. Apple too showcases small businesses that improved their lot by using an Apple.

The Dell campaign involves a website, where the ‘Dell Heroes’ talk about how they took their own path. The link to Dell and how it helped them do that is a bit tenuous. Also, if you choose a machine with an operating platform used by 90% of the people, how exactly are you choosing your own path? The website also features the machines used by the Dell Heroes – most of the machines are in the range of Rs.125,000 to Rs.150,000 ($2500-$3000!). Whoa, if you are that well heeled you can pretty much choose your own path.

As for me, I am already on the path that I have chosen. It reads 1, Infinite Loop.