Much has been written about movie marketing of late. Movies are being marketed like traditional FMCG brands and every aspect of the film – it’s plot, the actors, the characters and props provides fodder for promotional campaigns. Among the US TV shows, the promotion for Trust Me, a series based on the goings on of an advertising agency caught my eye. The show is about two best friends working as creative partners at a top-ranked Chicago ‘ad agency’, Rothman Greene & Mohr.

While I haven’t seen the show, it is interesting to see the creation of an official website of the fictitious agency, replete with client roster, agency news and client extranet! 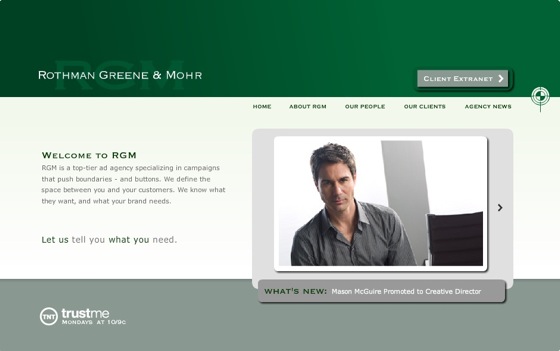 The show was created by Hunt Baldwin and John Coveny, who have a combined total of over 20 years of experience in advertising, having worked for JWT and Leo Burnett Advertising in Chicago.

In India, much of the movie marketing has become formulaic: presence of the stars as judges in some reality show, promotional events linked to an aspect of the film (hairstyle, for one), music videos and so on. As TIME magazine said, marketing a movie is like choosing the right outfit for a porn convention: in a crowd of exhibitionists, it takes real creativity to stand out. It’s all tukka. Overly hyped movies heighten the irritation factor if the movie is a dud (Chandni Chowk to China, anyone?). But then, you can’t fall short of the hype before the release, as some movies fail because they are under promoted. Several agencies have set up divisions to get a share of this growing business. According to Marketing Charts, Time Warner spent US$ 846 mn in online advertising in December 08. Media verticals like Big Entertainment have opened shops in this domain.

Among the recent marketing ploys, the stand out for me was the one for The Simpsons Movie. A number of 7-Eleven shops were converted into Kwik E-Marts. A dozen such stores sold stuff that were previously seen only on the TV show. 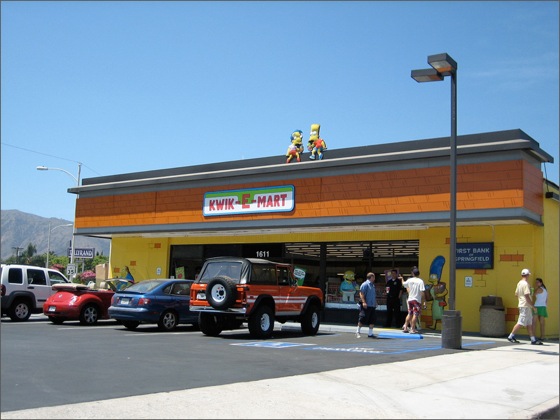 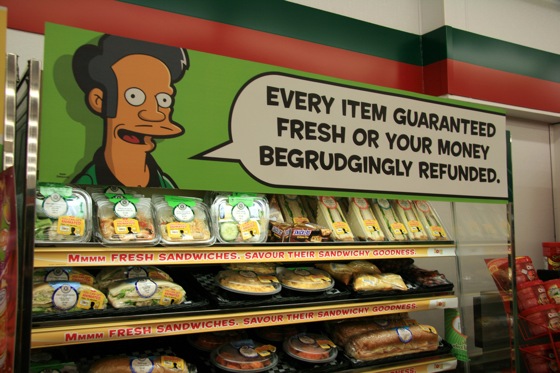 It was a great way of bringing alive the fictional characters to real life. Apparently, sales doubled during this period. I guess it all boils down to applying principles of old-school marketing & advertising and adding a twist of new-age promotions. Any other great examples of movie marketing and lessons thereof?