In ad agencies, it is pretty common to review the creative work, on the day of the big meeting with the client. In fact, it is not uncommon to have a review on the way to the client meeting. There could be 3-5 options as TV scripts and the decision to present which of those is often taken just three traffic signals before the client’s office. The end result – everyone is ad-libbing their way through preambles (often referred to as pre-mumbles), the actual presentation, the sell or the defence after the presentation. Sometimes the big bosses at the ad agency hear the script for the first time, along with the client. This happens irrespective of the time the agency had for preparation – be it 5 days or 5 weeks, especially it is a pitch. All these were common when I was in advertising (up until 2012) and I am sure the tradition continues. The reasons are simple: indiscipline, penchant for working late (as a badge to be worn), iterations and more.

What this does is that it takes away the opportunity to pause, reflect about the overall strategy and the recommendations. There is no time to sleep over it – hell, it is being developed giving up on sleep as the meeting is at 10 am the next morning. In the early 90s, I had witnessed the other extreme. A tactical press ad for an offer or a recruitment ad could take a week to develop – at least in some agencies where ‘creative’ was all powerful. The wait was usually worth it as the ad would have been ‘crafted’ well in terms of copywriting and art direction. The account executives were petrified of the creatives and almost always accepted the creative team’s recommendation – usually just one ad and not several options. Not a word of the copy could be changed without the writer’s approval. The business of marketing has changed drastically since then and speed of turnaround is key. No business has the luxury of time thanks to increased competition and an evolved, fickle consumer.

The pressure arising from social media and its demands of real time marketing, 24×7 presence and lightning fast responses contributes to the mindset of churning things out like a factory. You can’t blame the marketeer because if a live event or news item presents an opportunity for brand communication it has to be ‘wanting it great and wanting it now’. It is possible, but won’t be cheap. [bctt tweet=”Sadly, clients always want ‘fast & good’ but cheap too.”] 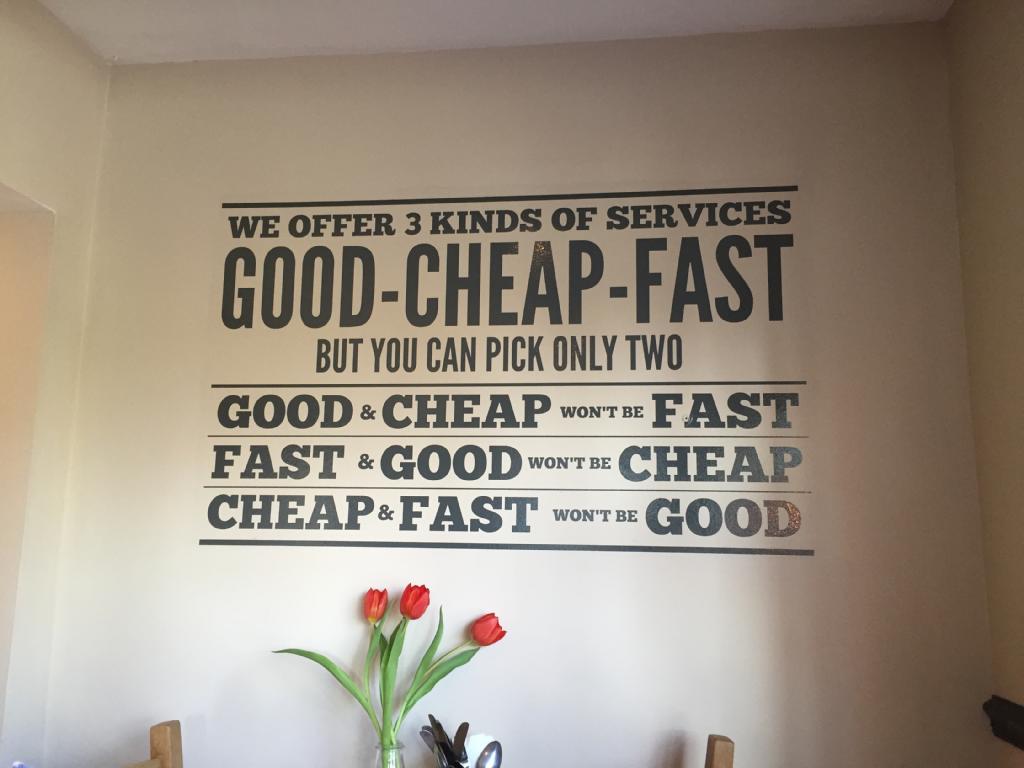 In this ‘I want everything and I want it now’ world, the casualty is the pause that reflects. We often don’t have the time to pull back and see the big picture – everything is a campaign that’s got to go now. The result: run of the mill stuff, content which looks good but may not be sound strategically or content which doesn’t add value to the reader or viewer at all. We see this happen in tech journalism. During and after every Apple event virtually all tech blogs compete with each other in live blogging, putting out stories as they break and so on. The end result: similar content across tech blogs. The really good opinions around the event usually get written a day or two after the event – ‘good & cheap won’t be fast’ at play. The marketing communication industry is on an Apple Event mode perpetually.

Some say “a good plan violently executed now is better than a perfect plan next week“. But that depends on context. Would you be OK with an aircraft building company rushing out the order before doing a thorough check? Obviously not. Also the state of perfection is ever changing, I guess. In advertising it is the difference between a tactic and strategy. Some of the content is time bound and has to go out within a specific time frame or it loses context. One can’t be attempting to perfect it and lost out on an opportunity which could benefit the brand. But there has to be some stuff worthy of a pause? Think about it.