The Daily News & Analysis (DNA) campaign is gathering steam in Bangalore. The first phase built curiosity and announced the intent to launch the brand. It has now moved on to a phase, which, from the hoardings I see, is meant to invoke pride in the city. 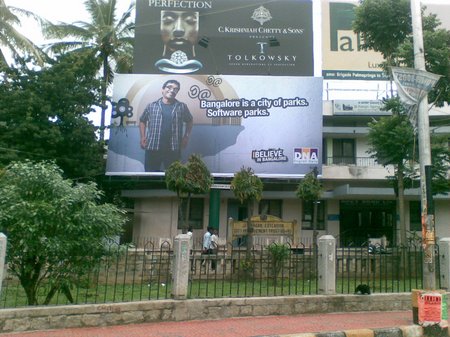 The topics cover software (predictable), the city’s landmark institutes like IIM, the corporate life and so on. One of the hoardings says: ‘C++, Kannada. The most common languages spoken in Bangalore’. And there is another one: ‘We used to export cardamom. Now we export CEOs’. Is it meant to make the Bangaloreon feel great about the city? And then equate DNA as a paper that reflects this attitude? If it is so, some of the lines could be seen as an outsider’s perspective of Bangalore. Not an inside one. The Bangaloreans are aware of it being the software haven, what new news are they being given in this campaign? They are more likely to be concerned with the power cuts, traffic jams and quality of life here.

There is merit in the underlying thought of ‘I beleive in Bangalore’. The city has many fans (from outside the state) who chose to live here because it had something different to offer. So, they do believe in Bangalore. The native Bangalorean feels that his city is no longer the same and is being taken over & changed out of shape. Will touting the software edge and other stuff which the city is known for, cut ice with either of the groups? Do tell.

There is no mistaking the impact of the campaign though – it’s everywhere. The multiple messages across a stretch of a road or in an area gives the campaign a larger thean life stature. And atleast for me, it has built up expectations about DNA. Interestingly, TOI has released a front page article today, claiming the No.1 spot in Bangalore.

Does the DNA campaign work for you?