Of late, I have been quite impressed with both the product and the advertising for The Power of Ideas project from The Economic Times, in partnership with Indian Angel Network. The Power of Ideas is ‘an initiative by The Economic Times to encourage anyone and everyone with an idea to realize his entrepreneurial dream. Ideas will be polished and nurtured with personalized guidance from senior mentors before being submitted to the largest group of investors for funding‘. Some see such initiatives from the Times of India Group to be mere marketing gimmicks to bolster their groups brands’ image. Their recent initiatives, Lead India and Teach India garnered a lot of press. The advertising for the former won several metals at the Cannes Awards too. Skepticism or cynicism about such initiatives are a result of poor expectations on the outcome and a belief such initiatives are largely one-off and never institutionalized.

Anyway, I am digressing. The print ads for The Power of Ideas reminded me of the good old days of print advertising. 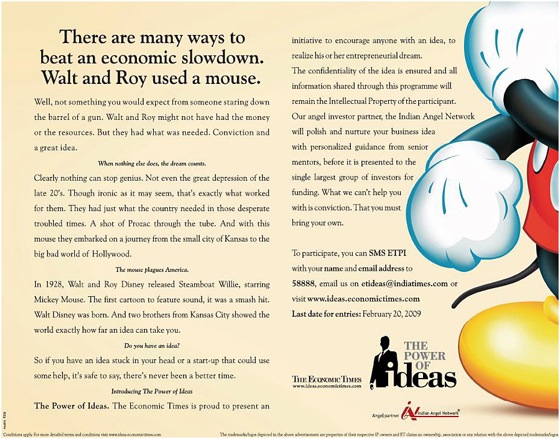 While the print ads took an educative, informational and inspirational route the TV ad relies on humour to dramatize the power of a good idea.

Coming to the project itself, it has the potential to unearth gems and motivate the numerous would-be entrepreneurs out there. For every successful business that made it on it’s own or thanks to a helpful investor there will be numerous others who failed to take off because of financial support. I am not sure if the campaign is promoted beyond metros and in Indian languages – it’d be great if they did. The business mindset of small-town India is also a gold mine for ideas. The website for the project, builds in a lot of interactive & informative elements including a blog, a trends of the ideas entered and a list of 25 Great Business Ideas. But the look and feel seems disconnected with the ATL campaign.

Will this tickle the entrepreneur in you? What did you make of the campaign. Do tell.