The New York Times has remained my favourite newspaper website for years. It’s unique layout mirroring the actual newspaper, building in tonnes of great content without making it a visual distraction, consistency in using the unique fonts and of course, being one step ahead of other newspaper websites when it comes to use of technology are all good enough reasons. No wonder it is voted as the No.1 newspaper website.

It’s recent additions include ‘Times Extra’, which aggregates headlines from other news outlets and adds them to the front page. 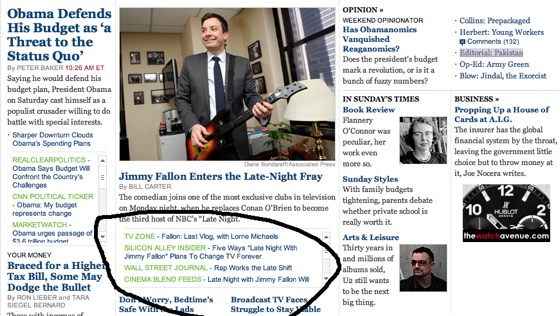 Isn’t that cool? A product not afraid to show its consumers the way to ‘competition’. Now how many Indian newspaper sites are willing to do this? This reminded me of a statement from Google’s philosophy: Google may be the only company in the world whose stated goal is to have users leave its website as quickly as possible.

The biggest news about NYT recently is this: it has released a new Application Programming Interface (API) offering every article the paper has written since 1981, 2.8 million articles. The API includes 28 searchable fields and updated content every hour. Now that’s leadership.

For an elaborate read on this and the state of newspapers see here.

How do Indian newspaper websites and magazines compare to International brands in the category? While things have changed over the years (India Today used to have the web content only for subscribers and have stopped that practice of late, a la WSJ), I feel we lag behind in big way, both in content and form. More on that later. Any thoughts?