At the recently concluded Goafest, Mr D. Shivakumar, Vice-President and Managing Director, Nokia India spoke about the coming 3G revolution in India. In another 2 years, India will have 500 mn subscribers of mobile phones and the break up could be:

In a world where we are still thinking the 30-sec TVC as the primary driver of marketing communications, this presents a new challenge to brand managers, agencies and media planners alike. Mobile advertising poses a couple of challenges of its own: 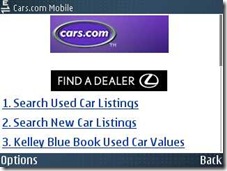 According to Wirelessweek: Coca-Cola’s Sprite brand  launched a WAP-based mobile community service in the United States aimed specifically at teenagers. The service, called The Yard, allows users to create a network of friends who can share photos and messages, as well as get content like mobile phone wallpapers, games and video mobisodes content. The design of the application and the content is specifically aimed at teenagers because they are a key market for Sprite. Portals like like Cars.com have a WAP site with Lexus as the search sponsor. (See screenshot from my mobile).

With technolgies like 3G coming into play the ‘always online’ consumer could be a reality sooner than we think. User-generated content and rich media would then be a reality. A prospect ripe with opportunities and pitfalls for brands.

Brands like Yatra and Makemytrip offer the convenience of booking air tickets on the mobile through branded applications.

Services like payment gateways on the mobile (mChek) are already a reality. There are several local WAP sites available in India, including JustDial and Infomedia.

Malls like Forum in Bangalore offer ads on your mobile screen through Bluetooth, driving traffic to specific outlets.

Indigo Nation’s Bangalore outlet recently turned into a gaming arena of sorts. Customers with Bluetooth-enabled handsets who visited the store were given a chance to download an Indigo Nation branded game for free and redeem discounts on purchases

A campaign which won a metal at last year’s Cannes was for BBC World. As part of an expansive marketing scheme to celebrate BBC World’s entry into the American market, the BBC put up a giant interactive digital billboard on the corner of 50th and Broadway.  The “Develop a Point of View” (Agency: BBDO, New York) billboard displays dramatic news photographs and invites people to text in their votes on key news issues. New Yorkers and visitors can vote whether illegal immigrants should be considered citizens or criminals; U.S. soldiers, occupiers or liberators. The votes will appear on the billboard in real-time and the updated tallies will be broadcast twice daily on WFAN’s “Imus in the Morning” show, as part of the BBC World radio promotion.

Such services and campaigns are likely to get more complex and widespread in the days to come. Which brings up issues like third-party monitoring, research and so on. And more importantly another medium which the consumer is going to spend time on, giving up time on something else. Will that be print, TV or web? Marketing communications needs to be tailor-made for this medium too, apart from several others that have mushroomed of late. I think we need to start thinking about these issues right away instead of being caught unawares. Exciting times ahead?