News is rolling in that Microsoft plans to drop Seinfeld from their advertising- after a long run of er…two weeks. It is being played out as something that’s already planned -the Shoe Store spot and New Family were meant to be ice breakers, they say. What gives? Is a 2 week burst enough to set a platform for achieving the larger objective – make PC ‘cool’? I think Microsoft is giving up too soon. The campaign may have got its share of the flak, but that was to be expected. It got people talking about Windows and seemed to create anticipation of what’s next. On Sept. 4, when the teaser ads started, the “buzz” about Microsoft was 25 percent positive and 13 percent negative and now it is 28 percent positive and 8 percent negative. In the wake of the successful ‘Mac vs. PC’ ads of Apple, which was dismissive of Windows, what more could they ask for? 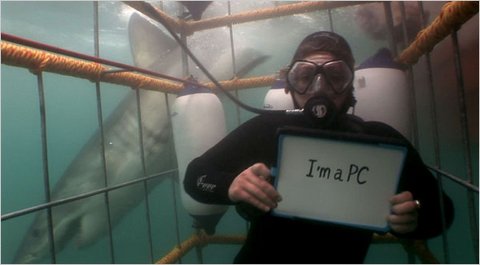 What is planned now is something that supposedly takes ‘I am a Mac, I am a PC’ head on. The New York Times says that the new campaign is an audacious embrace of the label, ‘I am a PC’. In this campaign, a Microsoft engineer who resembles John Hodgman, the comedian portraying the loser PC character in the Apple campaign says “Hello, I’m a PC, and I’ve been made into a stereotype.” Ooh poor baby – that sounds so whiny and victimized. What follows is a testimonial of sorts – a parade of everyday PC users—scientists, fashion designers, teachers, and celebrities – who talk about how much they like using computers that run on Microsoft operating systems and software. And it ends with the theme “Windows. Life without walls”. As one comment in the NYT article asked:

“If you live a life without walls- why on earth would you need windows?”

Apple executives have been “using a lot of their money to de-position our brand and tell people what we stand for,” said David Webster, general manager for brand marketing at Microsoft. And so this strategy of undoing the damage done by a smaller competitor. This is fraught with danger. Microsoft is the undisputed leader in operating systems. They are now acknowledging that a much smaller but significant competitor (albeit only in the US) is toying around with and defining their perception. The dilemma is that not responding to Apple’s taunts can damage Microsoft’s image in the long run.

Ages ago, the market leader, Hertz, kept silent about a cheeky Avis campaign that proclaimed: “We’re No. 2. We try harder.” But after Avis revenue grew robustly, Hertz shot back: “For years, Avis has been telling you Hertz is No. 1. Now we’re going to tell you why.” In India, when the much cheaper Nirma gave Surf a run for the money, Surf shot back with the Lalitaji campaign which repositioned Nirma as poor value. Some said that every time Lalitaji ad came on it reminded people of Nirma. This reactive approach could also make the leader blink. When a smaller player Pepsi, challenged Coke, with its Taste Challenge, Coke caved in and launched the New Coke only to withdraw it later.

By turning the ‘I am a PC’ label to its advantage, Microsoft is attempting to evoke pride in its users. It is simply best placed to do that job. I mean, 9 out of 10 PC’s in this world runs a Microsoft OS. While the Apple ad mocked PC as being incapable of doing anything more than spreadsheets, millions of PC users will disagree and proudly say they accomplish what they want in their PC. The flip side: it elevates Apple to a level far beyond their market share in the US. It makes Apple an equal to Microsoft.

I am yet to see the new ‘I am a PC’ commercial but I feel that Microsoft has given up too soon on a property that could have yielded results.

If all this is about making Microsoft cool (or as cool as Apple) they have a fundamental road block to overcome. As this article brilliantly summed it up: